I just installed the AnyConnect client from my company in order to get the stuff I needed to make OpenConnect work, so I did go through the install and might be able to help you out. This was with 3.1.04063, so keep that in mind as I don't know what's different for 4.0. My company has a Windows cifs share with the anyconnect available clients, but they were in a .pkg format. I extracted them with 7-zip on Windows, then copying that folder to somewhere I could get at from Arch.

Once booted into Arch, I did the following:

Now, I don't actually use AnyConnect, but that's what I did to get what I needed extracted to /opt/cisco. So, theoretically, it's a successful install.

I used to sort of be able to use the actual anyconnect client, but only from my 32 bit chroot (I'm on x64). And then something seemed to go awry with /etc/resolv.conf or some other network settings, as the successful VPN connection in the chroot didn't seem to translate into my 'actual' 64 bit environment and thus I couldn't do anything with the internet. Web pages just wouldn't load. Same with a 32 chroot installed browser, though, too... so I'm not sure what the issue was. I could ping, with ridiculously slow return times, but never do anything useful.

Finally I stumbled on this setup for openconnect. That's what I've been using every since. Only re-installed since I was having an issue with certificates. Turns out there's a bug in the version of the anyconnect libraries I was using with openconnect, and the fix was to upgrade. Thankfully my company had updated versions in that Windows directory when I checked, or I think I was stuck. Just got it working and happy.

Then I would run:

Oh, and with openconnect, I get a complaint if I don't have hal running, so you might need that.
Hope that helps!

openconnect - Multi-protocol VPN client, for Cisco AnyConnect VPNs and others
The program openconnect connects to VPN servers which use standard TLS/SSL, DTLS, and ESP protocols for data transport.

The connection happens in two phases. First there is a simple HTTPS connection over which the user authenticates somehow - by using a certificate, or password or SecurID, etc. Having authenticated, the user is rewarded with an authentication cookie which can be used to make the real VPN connection.

The second phase uses that cookie to connect to a tunnel via HTTPS, and data packets can be passed over the resulting connection. When possible, a UDP tunnel is also configured: AnyConnect uses DTLS, while Juniper and GlobalProtect use UDP-encapsulated ESP. The UDP tunnel may be disabled with --no-dtls, but is preferred when correctly supported by the server and network for performance reasons. (TCP performs poorly and unreliably over TCP-based tunnels; see http://sites.inka.de/~W1011/devel/tcp-tcp.html.) 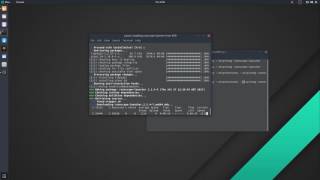 Read further options from CONFIGFILE before continuing to process options from the command line. The file should contain long-format options as would be accepted on the command line, but without the two leading -- dashes. Empty lines, or lines where the first non-space character is a # character, are ignored.

Any option except the config option may be specified in the file.

-b,--background
Continue in background after startup
--pid-file=PIDFILE
Save the pid to PIDFILE when backgrounding
-c,--certificate=CERT --force-dpd=INTERVAL
Use INTERVAL as minimum Dead Peer Detection interval (in seconds) for CSTP and DTLS, forcing use of DPD even when the server doesn't request it.
-g,--usergroup=GROUP
Use GROUP as login UserGroup
-F,--form-entry=FORM:OPTION=VALUE
Provide authentication form input, where FORM and OPTION are the identifiers from the form and the specific input field, and VALUE is the string to be filled in automatically. For example, the standard username field (also handled by the --user option) could also be provided with this option thus: --form-entrymain:username=joebloggs.
-h,--help
Display help text

On Windows, a relative directory for the default script will be handled as starting from the directory that the openconnect executable is running from, rather than the current directory. The script will be invoked with the command-based script host cscript.exe.

-S,--script-tun
Pass traffic to 'script' program over a UNIX socket, instead of to a kernel tun/tap device. This allows the VPN IP traffic to be handled entirely in userspace, for example by a program which uses lwIP to provide SOCKS access into the VPN.
-u,--user=NAME
Set login username to NAME
-V,--version
Report version number
-v,--verbose
More output (may be specified multiple times for additional output)
-x,--xmlconfig=CONFIG
XML config file
--authgroup=GROUP
Choose authentication login selection
--authenticate
Authenticate only, and output the information needed to make the connection a form which can be used to set shell environment variables. When invoked with this option, openconnect will not make the connection, but if successful will output something like the following to stdout: Thus, you can invoke openconnect as a non-privileged user (with access to the user's PKCS#11 tokens, etc.) for authentication, and then invoke openconnect separately to make the actual connection as root:
--cookieonly
Fetch and print cookie only; don't connect
--printcookie
Print cookie before connecting
--cafile=FILE
Additional CA file for server verification. By default, this simply causes OpenConnect to trust additional root CA certificate(s) in addition to those trusted by the system. Use --no-system-trust to prevent OpenConnect from trusting the system default certificate authorities.
--no-system-trust
Do not trust the system default certificate authorities. If this option is given, only certificate authorities given with the --cafile option, if any, will be trusted automatically.
--disable-ipv6
Do not advertise IPv6 capability to server
--dtls-ciphers=LIST
Set OpenSSL ciphers to support for DTLS
--dtls12-ciphers=LIST
Set OpenSSL ciphers for Cisco's DTLS v1.2
--dtls-local-port=PORT
Use PORT as the local port for DTLS and UDP datagrams
--dump-http-traffic
Enable verbose output of all HTTP requests and the bodies of all responses received from the server.
--pfs
Enforces Perfect Forward Secrecy (PFS). That ensures that if the server's long-term key is compromised, any session keys established before the compromise will be unaffected. If this option is provided and the server does not support PFS in the TLS channel the connection will fail.

PFS is available in Cisco ASA releases 9.1(2) and higher; a suitable cipher suite may need to be manually enabled by the administrator using the ssl encryption setting.

--no-dtls
Disable DTLS and ESP
--no-http-keepalive
Version 8.2.2.5 of the Cisco ASA software has a bug where it will forget the client's SSL certificate when HTTP connections are being re-used for multiple requests. So far, this has only been seen on the initial connection, where the server gives an HTTP/1.0 redirect response with an explicit Connection: Keep-Alive directive. OpenConnect as of v2.22 has an unconditional workaround for this, which is never to obey that directive after an HTTP/1.0 response.

However, Cisco's support team has failed to give any competent response to the bug report and we don't know under what other circumstances their bug might manifest itself. So this option exists to disable ALL re-use of HTTP sessions and cause a new connection to be made for each request. If your server seems not to be recognising your certificate, try this option. If it makes a difference, please report this information to the [email protected] mailing list.

--no-passwd
Never attempt password (or SecurID) authentication.
--no-xmlpost
Do not attempt to post an XML authentication/configuration request to the server; use the old style GET method which was used by older clients and servers instead.

This option is a temporary safety net, to work around potential compatibility issues with the code which falls back to the old method automatically. It causes OpenConnect to behave more like older versions (4.08 and below) did. If you find that you need to use this option, then you have found a bug in OpenConnect. Please see http://www.infradead.org/openconnect/mail.html and report this to the developers.

OpenConnect does not yet support all of the authentication options used by Pulse, nor does it support Host Checker/TNCC with Pulse. If your Junos Pulse VPN is not yet supported with --protocol=pulse, then --protocol=nc may be a useful fallback option.

RSA SecurID secrets can be specified as an Android/iPhone URI or a raw numeric CTF string (with or without dashes).

For Yubikey OATH the token secret specifies the name of the credential to be used. If not provided, the first OATH credential found on the device will be used.

For OIDC the secret is the bearer token to be used.

If this option is omitted, and --token-mode is 'rsa', libstoken will try to use the software token seed saved in ~/.stokenrc by the 'stoken import' command.

--reconnect-timeout
Keep reconnect attempts until so much seconds are elapsed. The default timeout is 300 seconds, which means that openconnect can recover VPN connection after a temporary network down time of 300 seconds.
--resolve=HOST:IP
Automatically resolve the hostname HOST to IP instead of using the normal resolver to look it up.
--servercert=HASH
Accept server's SSL certificate only if the provided fingerprint matches. The allowed fingerprint types are SHA1, SHA256, and PIN-SHA256. They are distinguished by the 'sha1:', 'sha256:' and 'pin-sha256:' prefixes to the encoded hash. The first two are custom identifiers providing hex encoding of the peer's public key, while 'pin-sha256:' is the RFC7469 key PIN, which utilizes base64 encoding. To ease certain testing use-cases, a partial match of the hash will also be accepted, if it is at least 4 characters past the prefix.

--useragent=STRING
Use STRING as 'User-Agent:' field value in HTTP header. (e.g. --useragent 'Cisco AnyConnect VPN Agent for Windows 2.2.0133')
--version-string=STRING
Use STRING as the software version reported to the head end. (e.g. --version-string '2.2.0133')
--local-hostname=STRING
Use STRING as 'X-CSTP-Hostname:' field value in HTTP header. For example --local-hostname 'mypc', will advertise the value 'mypc' as the suggested hostname to point to the provided IP address.
--os=STRING
OS type to report to gateway. Recognized values are: linux, linux-64, win, mac-intel, android, apple-ios. Reporting a different OS type may affect the dynamic access policy (DAP) applied to the VPN session. If the gateway requires CSD, it will also cause the corresponding CSD trojan binary to be downloaded, so you may need to use --csd-wrapper if this code is not executable on the local machine.
In the data phase of the connection, the following signals are handled:

SIGINT / SIGTERM
performs a clean shutdown by logging the session off, disconnecting from the gateway, and running the vpnc-script to restore the network configuration.
SIGHUP
disconnects from the gateway and runs the vpnc-script, but does not log the session off; this allows for reconnection later using --cookie.
SIGUSR2
forces an immediate disconnection and reconnection; this can be used to quickly recover from LAN IP address changes.

Note that although IPv6 has been tested on all platforms on which openconnect is known to run, it depends on a suitable vpnc-script to configure the network. The standard vpnc-script shipped with vpnc 0.5.3 is not capable of setting up IPv6 routes; the one from git://git.infradead.org/users/dwmw2/vpnc-scripts.git will be required.